The three protagonists have also their characteristic textures, which are iterations of specific conceptualisations which I could describe as ‘leit-ideas’. These are neither melodic, nor rhythmic or harmonic ideas. Therefore they could not be notated. Here follows a very simple visualisation, but I emphasize that it is very schematic and is only an aid to describing the signification of these leit-ideas in some tangible way. 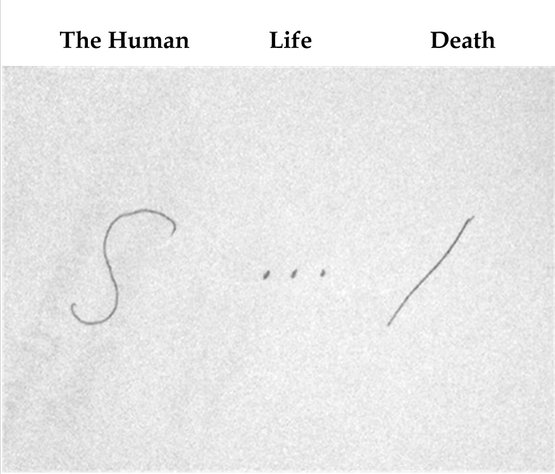 Figure 11: Descriptive visualisation for the leit-ideas characterising the three protagonists in The Mirror.

The expressive, human-like curved line is a visualisation of the leit-idea for The Human. The most obvious manifestations of it are the expressive lines comprising the textures that characterise The Human. Her vocal part abounds of similar curved lines, the high point being the only true coloratura in the part of this Coloratura Soprano, which is reserved for the last scene, bars 1020-1021, setting the word ‘Human’.

The only other coloratura-like passages are the few scream-like phrases at the beginning of Scene 2, bb. 360-361 and 375-376 (Example 16). That does not mean that the part is not dedicated to a Coloratura Soprano, because no other voice type could manage the high register pitches required consistently in her part. It is rather a conscious restriction which gives a particularly strong emphasis to the moments when these coloraturas appear, with the relevant psychological and philosophical implications involved.

Another less obvious implementation of the leit-idea for The Human is in the rhythm of the lines that comprise the most typical kind of orchestral texture that characterizes her. In Figure 13 a rhythmic reduction of a line of this kind is stripped down to a single pulse subjected to constant changes of tempo, in other words: rhythmic/metric modulations: 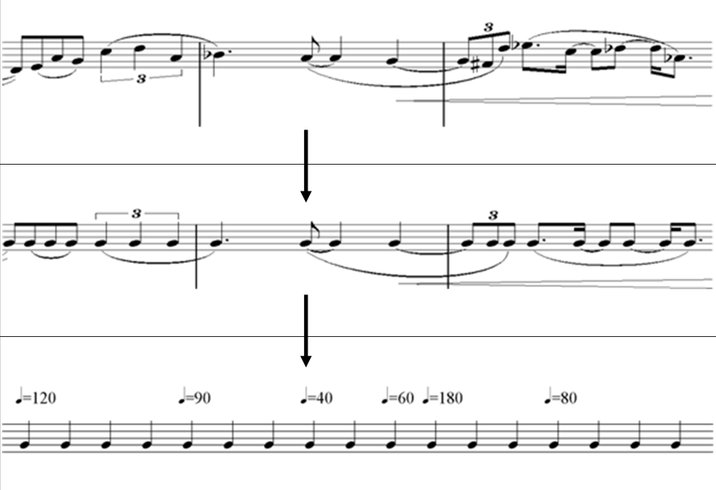 Figure 13: Rhythmic reduction for a typical line from the orchestral textures characterising The Human.

Top stave:  the line itself.

Second stave: the rhythm of the line, stripped off pitch contour.

Third stave: The rhythm from the second stave, reduced to pulse with tempo changes.

This string of rhythmic/metric modulations at the bottom stave in Figure 13 resemble closely Birtwistle’s approach to rhythm in works like The Silbury Air, for example, which has been an important inspiration for me.

If we represent the tempo changes from the bottom stave in Figure 13 in a graph where the vertical axis represents tempo and the horizontal – time elapsing, the graph would give us the curved line for The Human: 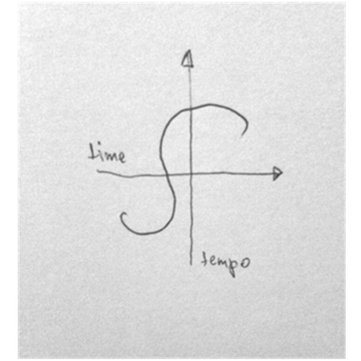 Figure 14: Imaginary graph presenting the tempo changes from the bottom stave in figure 13 as function of tempo and time.

If we now look at the texture that lines of this kind comprise, in Figure 15, we can see how the leit-idea for The Human permeates the texture throughout, through the rhythm of the lines. The rhythm of each line is a pulse which undergoes gradual changes of tempo – a kind of morphing rhythm. The changes are not rapid, because by the nature of the music, performers tend to do some rubato that make the rhythm and phrasing more smooth, which I do encourage (as long as it is very subtle). Some further relevance of this process to the general metric structuring in my music will be discussed in Chapter 6.

If we now refer back to Scheme 1 we would see the leit-idea for The Human permeating all the interrelated components – rhythm, contour, morphomodal network. 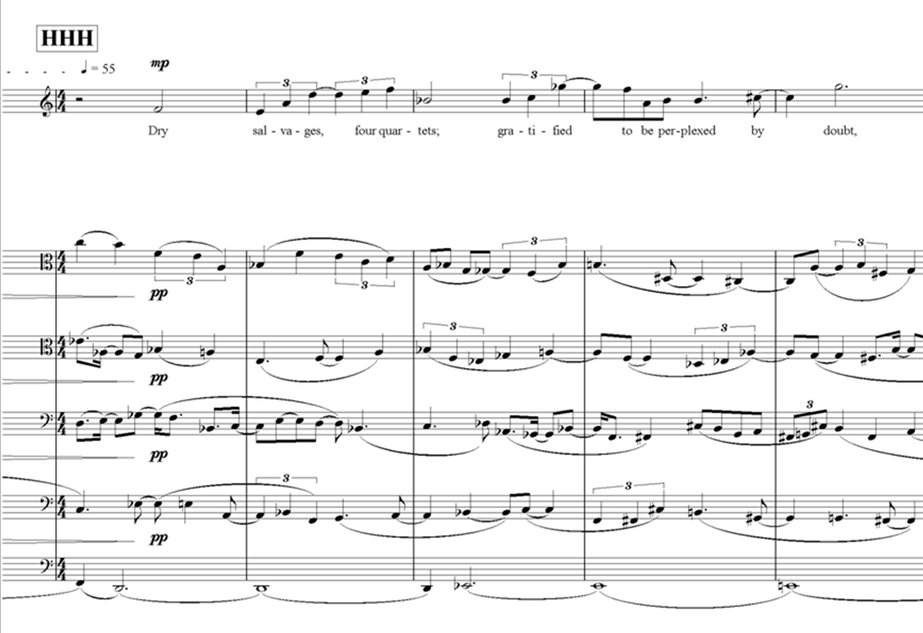 There is one more influence worth mentioning here: the superimposition of simultaneous strata in different tempi is famously used by Ligeti in his Poème symphonique (for 100 metronomes) and appears in later works of his in differing forms. In my work, a more apparent similarity to that approach could be observed in Figure 18 in this text. But in Figure 15 (above), the rhythm could be seen as Birtwistle’s influence in the horizontal and Ligeti’s in the vertical, with a further spin as the rhythmic strata shift and morph continuously in both dimensions. As this texture became a prototype to a great variety of other textures, not limited to the opera alone, the importance of the features outlined here is general for these compositions. It is important to emphasize also that particular attention has been paid to notate these rhythms in the simplest possible way, which I find helps the players to produce what I require musically better.105 (click)  In this case I notated it using the common denominator of the crotchet pulse.

More generally, this approach to texture can be seen as similar to Ligeti’s micropolyphony; and Britten, Spassov and Niculescu’s heterophonic approaches. It is also influenced by the particular kind of controlled aleatorics typical for Kazandjiev, Iliev, Penderecki, Lutosławski, which was also typical for an earlier group of my works (before those in the current portfolio), where the initial proto-ideas for this approach to both texture and harmony started to emerge gradually in my practice.

This kind of morphing texture, as seen in Figure 15, proved to be very resourceful and could be observed in numerous variations across the majority of compositions in this thesis. It is one of the most natural means to work texturally within the morphing modality harmonic technique described throughout this text.

The most apparent manifestation of the leit-idea for Death is the obsessive use of scale-passage textures characterising him, as well as glissandos and similar, immediately audible/visible devices. 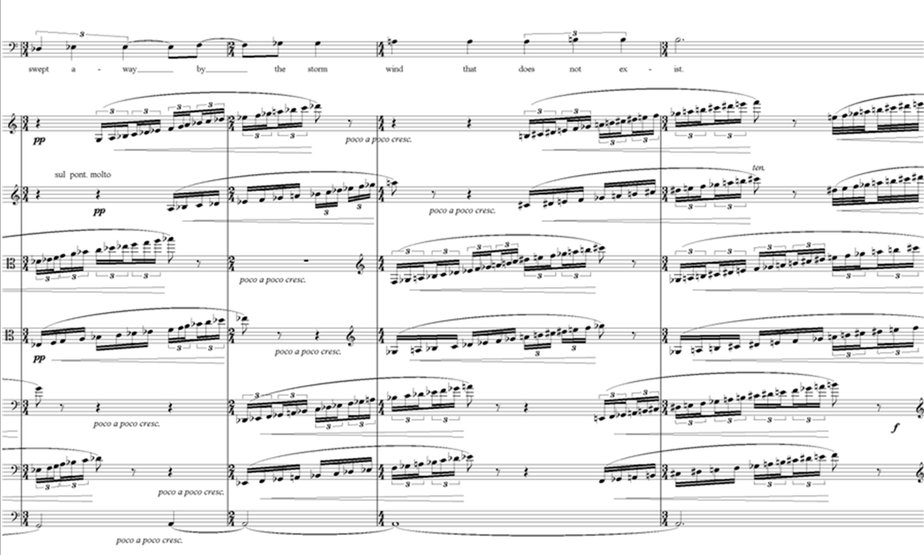 The pitch structure of the scales in Figure 16 is controlled by the background morphing modal network and changes gradually with time. In the meantime in each moment all scalar sections that sound simultaneously share common modal pitch set content which contributes to their fusion into a holistic musical percept. Thus the busy foreground texture and the more slow and solemn background harmonic change interact, building the complex musical character of the protagonist Death.

His vocal line is generally an endless movement upwards, with only occasional downward leaps that are designed to facilitate the further continuation of the endless rising line. Thus his vocal part is particularly ‘inhuman’ and unnatural in its pitch contour. The musical emphasis lies in the rhythmical treatment of the text, which follows a natural speaking rhythm, and which also resembles a particular method of reading the Epistle and particular prayers in the Orthodox liturgy. I have not sought to attach a negative significance to the liturgical associations evoked by this musical image. There is a certain polysemantic significance attached to this musical metaphor, as it is with many other metaphors in my work. After all, death is only a transition to eternity and in its solemn inevitability and connection with life eternal there are specific connections between this musical metaphor and the music of the Liturgy. Further connections could be understood by contemplating about the passage from the libretto that is introduced as a motto to the Introduction to this commentary. There is something rather interesting to observe in this respect at the very end of the opera, from Figure RRR to end (Example 10) – first in the soprano part, and then in the ensemble in the last 2 bars. I will leave the interpretation of this moment to the reader (and the stage director(s)).

The endless rising of the vocal part for Death, which is its general feature, requires a particular approach to the harmony construction, as the morphing modal network governing the overall pitch content of the texture had to be twisted quite radically and somewhat ‘unnaturally’ around the relentlessly rising vocal line, in order to accommodate its unusual rigidity (example in Figure 17). That has a metaphoric significance, regarding the protagonist Death as twisting the reality around him, causing chaos and destruction.

There are only a few figurations and downward changes in the direction of the relentless movement in Death’s vocal line, and more substantial changes happen in The Duel, with particular significance which will be discussed below.

The leit-idea for Life, imagined as a pulse, is most immediately associated with a particular relentlessly-rhythmical quality of his musical character, which differs significantly from the musical characters of the other two protagonists. While Death’s image is based upon grand gestures and The Human’s – upon meandering melodic lines and wavy textures, in both cases there is less rhythmic emphasis than in Life’s musical characterisation. The textures characterising him are constructed from pulse-like elements entirely, and a kind of ‘rhythm-box’ rhythms (which I will discuss further in Chapter 7) are typical for his musical image. That is a metaphor for the pulse and rhythm of physical life. However, that rhythm in the opera acquires also hypnotic, predatory, obsessive, violent, and ultimately – destructive associations. 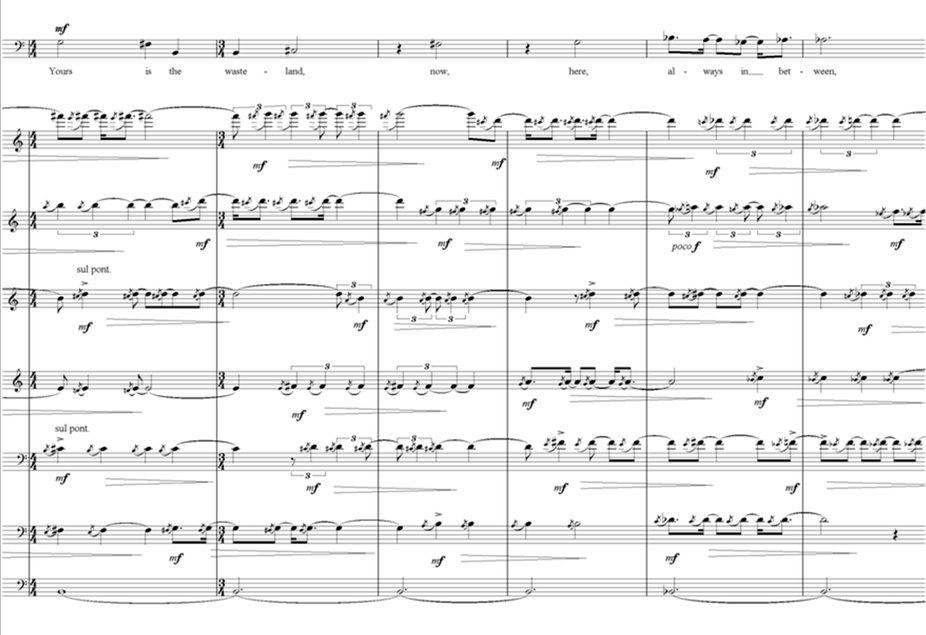 In Figure 18 an example for texture constructed upon the leit-idea for Life is provided. It is de facto a vertical modal cluster (as discussed in Chapter 2.2), which is punctuated by rhythmic pulsations in different tempi (notated as various syncopations and triplets within the main crotchet pulse). Thus the foreground is a direct verticalisation of the background morphing modal network and the modal morphs are materialised through the subsequent changes of pitch in the particular string parts in the texture (sound excerpt above).

3.2.The Duel: from amalgamation to annihilation