While in the opera, symphonic and concerto works in this thesis synchronisation depends on the conductor, in Three Songs..., as well as in String Quartet No.1, I had to consider how the players would synchronise in a chamber context. The general melodic and rhythmic fluidity in my method presents the performers with particular challenges regarding synchronisation in all my works, both conducted and not-conducted, which is not always conspicuous due to the simplicity in notation that I pursue in general. Although in my morphing textures vertical synchronicity is often deliberately avoided (as it is often in controlled aleatorics), performing the rhythms of the separate components of the texture too imprecisely and out of sync destroys the sense of harmony that I aim for. In this context a beat-to-beat synchronisation is often not a solution, but rather, organising the phrasing of the separate components towards particular centre-points provides the means for synchronisation, while a certain degree of freedom in the form of rubato is also available and does not interfere with the overall sense of harmony (if it is applied in a well-balanced and subtle way). That is valid both for the conducted and not-conducted works, and in those that are conducted there are particular challenges for the conductor, which are not obvious, but I will emphasize that phrasing towards centre-points is the key to the successful performance of these textures, both for conductors and players. In the chamber context of Three Songs..., where no conductor is required, I have embedded a particular synchronisation device into the texture. That is the deliberate coincidence of emphatic syllables in the sung text with phrasing centre-points in the violin part, as in the following example: 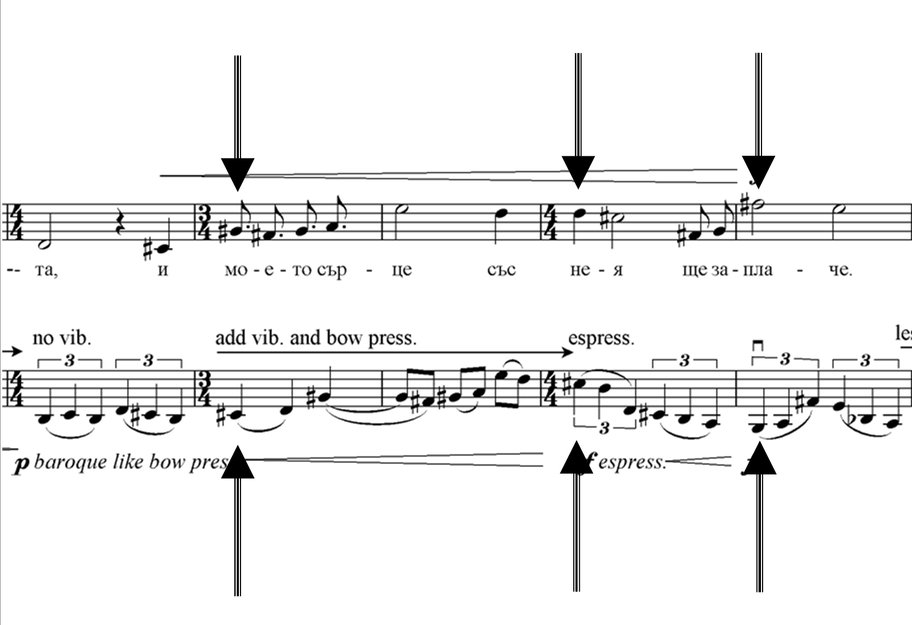 It is apparent that in Figure 22 these centre-points appear on first beats of the bars, but that is because I created the changes of time signatures so that the barlines emphasize the centre-points of text and phrasing. However, that use of barlines is not exclusive. Although this ‘emphatic synchronisation device’ is applied throughout the work, in other instances the rhythmic centre-point is provided by the Soprano or Violin alone, while the other line twists around it. Emphatic syllables are also accentuated at offbeat positions across bars and beats, thus the use of the devise described here is diverse and balanced, as to avoid monotony.

The particular emphasis of attention, placed on these synchronisation points, together with the fact that only two lines are present in this texture, make the vertical dyads appearing in these centre-points particularly important perceptually. Thus the importance of their intervallic content is increased, but the intervals are of all possible sizes without preference to any particular kind and their use is contextual to the overall horizontal harmony and the contour of the melodies.

However, in bars 122-139 (Example 21) the texture is reminiscent of a two-part Baroque counterpoint (albeit somewhat skewed), and that similarity is not accidental. If I have to name a single favourite composer, that would be J.S. Bach. I have spent a lot of time during my teenage years writing canonic and fugal structures and these abound in my works from that period, particularly my First Percussion Concerto (2002). Although the non-contrapuntal, linear morphomodal morphopolyphonic technique described here differ significantly from Baroque counterpoint, there is a marked general influence from Bach and Handel’s work upon my music and that is probably most evident in Three Songs... . Furthermore, polymetric twisting of lines around vertical cadences is typical to Ars Subtilior and this song cycle shows some limited similarity to it, mainly due to the presence of the kind of emphatic dyads described above. But it should be noted that such quasi-cadential occurrences are not used continuously in any other work in this thesis.

As such quasi-cadential structures seem to create quasi-tonal percepts, I must say that such moments are not unwelcomed, and could be sometimes observed more sparsely throughout my other works. However, these are surface features of the foreground. They are occasional extensions of the general framework of morphing modality to the tonal domain. What makes them possible is the modal nature of the pitch networks, which overlaps with the major and minor modes/scales of the tonal harmonic system. However it was described above that this morphomodal framework can extend to the atonal domain just as well. These ‘tonal’ and ‘atonal’ possibilities within morphing modality are an important point of flexibility that I have been developing consciously in the process of refining this technique. However, even the most consonant passages in the present thesis could hardly be accounted by entirely tonal means in a sustained manner, as there is a significant and fundamental difference between morphing modality and tonality.

The modal networks which I morph into each other do not form hierarchies in which some pitch collections are more important and central than others. No network amongst them has a tendency to resolve into another one, there are no dominants, subdominants or supertonics etc. which have to resolve in their tonics. All these modal networks I see as images with differing colours and characters133 (click)  which I morph into each other. The process of modal morphing is precisely what gives this kind of harmony its life, but it is a matter of free choice which modal network will be the one to follow in the morphing process, as no predetermined hierarchy of pitch collections as main (tonic), and related (dominant/subdominant etc.) exists in my method. Therefore morphomodal harmony is not directional in the tonal sense. This does not exclude directionality from music altogether, but in my works directionality is conveyed primarily by the means of gesturality, phrasing, rhythm, dynamics and textural development. Although it can be developed in such a way as to underline modal change, creating boundaries, it could in the contrary be constructed so as to blur harmonic changes over morphs. Therefore, in this compositional method directionality is not dependant on harmonic progressions and cadences.

The internal hierarchy of pitches within the modes, as established by the modal centre, is ascertained by linear means in the morphomodal method, as supposed to the chordal mechanisms, which are the main agents of functionality in tonal music. Therefore in morphing modality that modal kind of pitch hierarchy is far more flexible practically than the tonal hierarchy in tonal music. That is because the ultimate freedom in the shaping of both the intervallic structure and the cyclic structure (Chapter 6.1) of the dynamically shifting/morphing scalar/modal network, and the flexible shifting of the modal centre across this very dynamic morphomodal network, combined with the complete liberation of the various textural components from limitations in their vertical coordination, gives a far greater freedom in the process of composing than the tonal method. At the same time this freedom does not come at the cost of losing the capability to shape and control the sense and colour of harmony, the balance of textural consonance and dissonance, or the ability to coordinate the various simultaneous textural strata into a whole that makes a common harmonic sense (to be further discussed in the Conclusion). That capability for harmonic control does not involve empirical testing of every sonority in the process of composing, because the system of principles and their interaction, as outlined in this text, provides the means to shape the harmony through controlling the basic factors that generate it from the outset in the process of composing, and namely: 1. intervallic structure of the modal network, 2. textural contour and rhythm, 3. modal centre. This allows me to start with an initial idea for the feeling, emotional state and sense of harmony, and their changes in time, and to transfer that idea to the fabric of music through controlling the aforementioned main factors in their interaction in the process of creating the overall musical fabric. Such control is evident in tonal composition as well, but its mechanisms are completely different, as the means of control in that system are: types of chords, functions and roots of chords, their interactions with melody and bass, cadences etc. and in tonal counterpoint the emphasis is on the intervallic relationship between the polyphonic voices. Therefore, if the term ‘functionality’ is applied to morphing modality, its meaning and practical operation will be completely different from ‘tonal functionality’ as understood in common-practice music.

Meanwhile, the same methodological framework of morphing modality provides the means to create musical structures that sound ‘atonal’ (as discussed in Chapter 2.1), as well as ambiguous intermediary states between ‘tonal’, ‘atonal’ and ‘modal’ percepts. This flexibility is very important for me as an artist, and was one of the main questions and aims of this research, as outlined in the introduction.

It is evident that although morphing modality is built upon many traditional elements across the many traditions that inspire my work. The particular realignment and synthesis of these theoretical and practical elements creates different and new results.

As I have been using the term Morphing Modality consistently, I should mention a wider significance it might have. I have used this term for my own compositions and research since 2008 and I have been publishing it as a term in programme notes and on my website ever since. There were no other uses of this term elsewhere up until 2011, when a blog article by Hal Rodriguez, a Canadian-based pop guitarist appeared online.134 (click)  In it he explained in a rudimentary form a process of ‘modal morphing’ in his improvisation practice, which is by essence identical with the core of the pitch organisation process that I describe here. Although I have extracted that process from the ancient theory and practice of Eastern Orthodox Christian Chant and similar processes do also exist in many other traditions (as discussed in Chapter 1), the pairing of that process with the idea of morphing is quite contemporary and could not have been thought of even half a century ago. It seems, however, that this idea is somehow ‘in the air’ today, because although I have published the term and its application much earlier than Mr Rodriguez, I do not think he would have been aware of my work due to the significant genre and location differences that set us apart. 135 (click)