Comprises of 3 symphonic works that can be performed either separately, as standalone tone poems, or together, as a Symphony

Although Symphonic Triptych No. 1 was written in two phases, its parts are conceived in such a way that they result in a Symphony in three movements (the playing order is determined by the conductor), or each part may be performed separately.

The first part of the Triptych, commissioned in 2006 by the Varna Summer International Music Festival and premiered by the Sofia National Philharmonic Orchestra conducted by Dian Tchobanov, centres on the life and suffering of St Sophia (Wisdom) and her three daughters Pistis (Faith), Elpis (Hope) and Agape (Love), featured in the title.  The patron saint of the Bulgarian capital Sofia was martyred during the persecution of Christians under the Roman Emperor Diocletian around the year 304.  Familiarity with the fate of the young girls and their mother is not required in order to notice the abrupt changes in mood of the music.  Brute force suddenly breaks into their lives (as happens through the ages and today).  Faith, Hope, Love and Wisdom are exposed to the toughest trials, portrayed in a conflict of sonic worlds.  Liturgical echoes from the early Christian era collide with orgiastically distorted rhythms and melodies.  Anarchic games of chance collide with linear polyphony and homophonic textures.  The allegorical Tone Poem is dedicated to the Bulgarian people and the patron saints of their capital.

The first recording of the central piece took place in 2007 with the Bulgarian National Radio Symphony Orchestra, conducted by the composer.  It was broadcast internationally and represented Bulgaria at the International Rostrum of Composers, UNESCO, Paris.  Composed shortly after the death of György Ligeti, Heavenly Reflections is dedicated to his memory.

The subject has its origins in early Christian tradition.  It draws upon the Fall of Lucifer (Luke 10:18: ‘I saw Satan fall like lightning from heaven’), War in Heaven (Revelation 12:7: ‘And there was war in heaven, Michael and his angels fought against the dragon’), and the origin of Evil.  The ‘Heavenly Reflections’ mirror the dwindling light and perfection of Creation.

As with the subject, the music is also rooted in early Christianity, more specifically in the Byzantine-shaped Chants of the Eastern Church.  With the intonations of their liturgical styles in his ear, the composer has developed a multilayered network of lines, changing between bonds and freedom, law and arbitrariness, harmony and cacophony.  ‘Imperceptibly gradual darkening and corruption gives way to a violent climax, pierced by the brass sounds of what can be read as Tuba Mirum, or the Jericho Trumpets, or in this case more likely as the battle cry of the Archangel Michael (Mi-kha-il), reversing the process towards purification, sanctification, but also fading further and further away, as if out of sight.’  (Martin Georgiev).

The final part of the Triptych originates in sketches conceived during the composer’s Embedded residency with the London's BBC Symphony Orchestra.  The work is dedicated to the memory of his aunt who passed away in 2014, the cardiologist Petia Pancheva Panayotova.

Rescue is as equivocal as the other parts of the Cycle.  Beginning with the life’s work of Dr. Pancheva, who as a reanimation cardiologist saved the lives of many clinically dead patients, the music also reflects on the death on the cross and resurrection of Christ as the saviour of souls, as well as the rescue of drowning refugees from the Mediterranean (whose terrified faces were in the mind's eye of the composer as he worked on the music).

The portrayal of force of nature, need, solitude, self sacrifice, salvation and redemption pose extreme challenges for his sonic language.  Inspired by the process of computer generated manipulation of images (image morphing), Georgiev developed within his doctorate at London’s Royal Academy of Music a specific technique for composition, which he calls ‘Morphing Modality’.  It follows fundamental principles of Bulgarian and Byzantine Orthodox sacred chant, and also corresponds to research in Music Psychology and Psychoacoustics.  While the genesis of this technique is discernible in Pistis, Elpis, Agape  (2006) and Heavenly Reflections (2006), in Rescue (2011 - 2015) it has reached maturity, which is demanded by the complex concept of the work.

All three pieces share a final question.  Instead of celebratory redemptive music, salvation at the end rings out as the distant music of the heavens (high violins, glockenspiel).  The drowning are ashore, and all questions remain open. 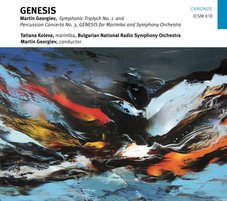