For Marimba and Symphony Orchestra

(Second version 2014 for Marimba and Piano)

Commissioned by the Municipality of the City of Varna

Movement 2 - And God said, Let there be light.

Movement 3 - And the light shineth in darkness; and the darkness comprehended it not

Listen to excerpts from the 2014 Studio Recording:

Listen to Audio Clip for Movement 1

Listen to Audio Clip for Movement 2

Listen to Audio Clip for Movement 3

Instrumentation of the Original 2011 edition for Marimba and Symphony Orchestra:

Percussion Concerto No.3 'Genesis' was commissioned by the Municipality of the City of Varna, Bulgaria, in 2011, for the prominent Amsterdam-based virtuoso Tatiana Koleva, winner of the Gaudeamus Interpreters Prize and Darmstadt Kranichsteiner Musikpreis and professor in Marimba/Percussion at the Rotterdam and Groningen Conservatoires. Koleva and Georgiev are both Varna-born and graduates of the National High School of Arts 'Dobri Christov' in their native city (on the Bulgarian Black Sea coast), and they both share particular relationship with the Marimba, which was also the main instrument of the composer/conductor, who is a recipient of numerous awards as a percussionist in the past. The world premiere of the concerto was given by Tatiana Koleva and the Varna State Opera Symphony Orchestra, conducted by the composer, alongside works by Mozart and Tchaikovsky, at the Varna State Opera House on 26 October 2011, which accidentally coincided with the 55th birthday of composers' father, to whom the concerto is dedicated. The first recording was produced by the Bulgarian National Radio with Tatiana Koleva and the Bulgarian National Radio Symphony Orchestra conducted by the composer in 2014.

The concerto is composed with Georgiev's signature technique for composition, Morphing Modality, which he developed within his PhD research in Composition at the Royal Academy of Music, University of London (2012). The technique is informed by the image morphing technique from the visual arts, taking into account particular aspects of music psychology, perception and cognition, and involves a particular approach to ‘modality’ where the monophonic horizontal harmony and modulation from the theory and practice of Bulgarian-Orthodox and Byzantine Chant interacts with particular kinds of morphing texture, inspired by micropolyphony, heterophony, linear polyphony and aleatorics, creating fluid morphing modal harmony. As a whole, the research reflects his quest for a holistic and integral, yet very flexible systematic approach to pitch organization, to enable him to achieve the extreme contrasts in harmony required by his aesthetics generally. In the research the concepts of ‘mode’ and ‘modality’ were broadened and refined practically and theoretically, resulting in a technique where semitonal and microtonal; modal, atonal and quasi-tonal aspects are integrated within a single working method with its system of grounding principles, providing particular opportunities for liberation of all elements of texture from vertical, intervallic, chordal and contrapuntal considerations, while keeping a precise and detailed control over the sense and colour of harmony. The concept of morphing is applied also to rhythm and musical form and employed as a general tool for creating musical processes and creating connections between initially disconnected elements in many aspects of the compositional process. The 3rd Percussion Concerto Genesis was one of the latest works created and included in the doctoral research.

The Concerto is contemplation on 3 biblical verses in their complex polysemantic, multidimensional plethora of notions, ideas, atmospheres and memories. Each of the 3 interconnected movements is titled after a biblical verse, the first two from Genesis and the last from the Gospel of St John, as follows: 1. ...and darkness was upon the face of the deep. And the Spirit of God moved upon the face of the waters 2. And God said, Let there be light 3. And the light shineth in darkness; and the darkness comprehended it not. The musical lexis in its complexity of opposing historical and geographical references, integrates intonations from Bulgarian and Byzantine Orthodox Chant holistically throughout the work, and in the second movement a subtle reference to the medieval Bulgarian Chant Blagoobrazny Yosif as preserved in the Russian sources of Bolgarsky Rospev (Bulgarian Chant) (traced back to its Bulgarian roots by contemporary researchers) is featured in a central cadenza-like passage for the solo Marimba, where the singing quality of the right hand roll and its polyphonic interaction with the left hand, spotlight the unusual combination of features that the Marimba offers as an instrument - the refined singing lines, typical of strings, winds and voices on one hand, and the polyphonic capabilities of keyboards on the other. Other central features in the Marimba part are the use of string bows, the 6 mallet sections and a significant variety of mallet types and their nuances. 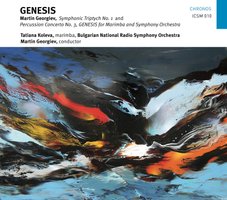